These past ten days have been movie heaven for me.
So many releases, so little time. So, I went and watched a whole bunch of films that I wanted to see… and some that I didn’t. I think Manish has video proof of me kickin’ & screamin’ when he dragged me for Dum Maro Dum (Seriously, who gives the hot guy a name like ‘Joki’?!!)
Anyway, Next up was Limitless, which I went to watch a little reluctantly because it had Bradley Cooper in the lead and somehow he hadn’t quite made the cut for me yet. I mean, don’t get me wrong, I loved The Hangover, but lets face it, Zack G owned that film.

Alright, so back to Limitless. Ten minutes into the film and I was hooked. The pace of the film is quick. Not fast, not hurried but just the right amount of quick.
To live a life where you can access all that you have ever seen or heard or read, on command would make you Superman (without flight). Which is exactly what happens to failed writer Eddie Morra who spends his days & nights drinking and looking like he desperately needs a hairbrush. His life decides to get worse when his girlfriend leaves him. And just when he thought he had hit rock-bottom, he meets an old friend/sleazy drug peddler who offers him a mega mind enhancing, life altering drug which then lets him harness all his brain instead of the 10% that we’re all used to (and for some of us, 2%). Boom! Enter suave, dapper, clever Eddie Morra, Master of the Universe. Plus he’s armed with a new haircut. What could he possibly want more? Well, for starters, more of those crazy pills, which turned him into Bond, James Bond. And also, this is the part where the bad guys come in & the movie takes shape. I, for one, love the way it’s been shot & was pleasantly surprised to see Bradley Cooper hold his own. Must have helped being executive producer. Also, it’s an easy film to watch. At no point do you feel that you have to frown and break your brain to figure what’s up. So, I’m going to put it on the must watch list for anyone who might have missed it. 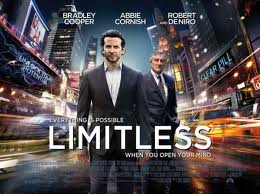