How to lose friends and alienate people.
That’s my one line review for ‘The Priest.’

But hey, I have some time on my hands. Let me elaborate.
I like post apocalyptic films. They make me wonder ‘What if?’ They are my version of horror.
Now I had seen the trailer for ‘The Priest’ and was pretty stoked about watching it. I had a day off between my shoots in Delhi and figured why not ask the entire team to come watch this supposedly fabulous film about priests hacking vampires to death. We’ll make a day of it. Eat lots of popcorn, wear 3D glasses, maybe even go wild and drink some soda.
And so, after many texts and phone-calls and confusion, the plan worked. Everyone was seated and the film began. It’s safe to say that they don’t like me all that much anymore. Here’s why :
The movie opens in a post-apocalyptic era in an alternate reality where the Church rules the land. A land, which has seen years of warfare between humans and vampires. That is until the Church trains a select few priests to wipe out the vampire terror. These are the Warrior Priests, who now have to live life like commoners and follow the rules of this dystopian land. Among these is ‘Priest’ – our protagonist. Who cannot use violence against anyone because he is sworn to the Church. But…. his niece who lives outside the fortressed cities has been kidnapped by the head of a newly formed vampire army, a man who is neither all vampire, nor all man… he is *cue build up music* a Human Vampire. And this is when the circus begins. And the ringmaster is the volley of utterly bad dialogues thrown at us.
“This war is over.”
“No. It has just begun.”
Wow.

Priest has to fight Human Vampire in order to save his niece. This involves a lot of CGI, slow motion shots and uber sexy costumes. All of which failed to impress me because they were so repeated and over done. Everything was CGI, all the action sequences were in slo-mo and the bad guy had the most ridiculous hat on at all times.
I think the only good thing about this film was that the vampires were pretty sinister looking. Their bodies didn’t glisten in sunlight, they didn’t talk in low whispers and they weren’t a bunch of poser hipsters, unlike some of their peers. These guys were mean, eyeless, fangy bastards who put up a good fight.

This is also the part where I got distracted for a bit because a few of the people I had come to watch the film with, sort of got up and left. I think they called me some names. I tried to focus after that, but it was difficult because the film was SO BAD. At some point I took off my 3D glasses to give myself a headache so I would be distracted from what was going on on the screen.

Some of you may think that I’m being a bit harsh with this review. And to those people I say, yes! You’re right. Why don’t you go watch this film. And remember, Crocin Pain Relief has 150mg more of paracetamol than the regular Crocin. Enjoy. 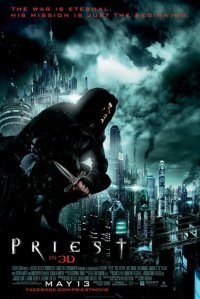