My friend Cyrus and I have worked as sounding boards for each other for the last ten years. In this period we’ve both changed jobs and industries several times and somehow it’s always worked to have his opinion floating around somewhere in my head before I took a leap or stuck to a current situation. And I think we’re each other’s cheerleaders without ever shouting it out loud.

A year ago I decided that I wanted to quit what I was doing and dive in with both feet into writing. Of course Cyrus thought this was a great idea, mostly because he had just finished a year of being an assistant photographer after quitting his amazing marketing job. He has critiqued a lot of my work, given sound advice and made fun of me constantly.

He texted a while back saying that a friend of his runs an online publication called ‘Unmapped’ and that I should write for them. He connected Karim Meggaro (editor and publisher of Unmapped) and me via email and after a back and forth of a few mails we decided on a piece that I could pen for Unmapped. The issue was about coastlines and my idea was to write about the coastline of Mumbai from a time gone by when the beaches were pristine to a coastline of a Mumbai from the future, where the beach would be clean, accessible and people friendly.

The article was published last week, but I didn’t know everything I needed to know about Unmapped. So I shot Karim a few questions to clear the fog. His answers made me fall in love with his ideology. Have a read for yourselves.

When and why did you start Unmapped?

A little over a year ago, I was sat in a pub in Copenhagen, having just quit my job, trying to come up with a great concept for a magazine. I had watched the online publishing industry grow and develop from a distance, and I figured now was a great time to jump in and try my hand. My idea was to create something that told stories from a truly international perspective – for an online audience that could be anywhere in the world. I also wanted to do something different from the traditional travel magazine – no paid junkets to luxury hotels, but real stories, told by locals, from places all over the world. Once I’d come up with the name, everything was set. Then the hard work started…

What were you doing before that?

Prior to Unmapped, I’d been working for about five years for magazine publishing houses on projects around the world – from Argentina to Mexico, Taiwan to Russia, Australia to India. It was a great experience of both writing and editing, meeting people, and also, in the later stages, on running a publishing operation. One of the best lessons I learnt from this experience, and one of the things that I love most about Unmapped, is that every two weeks, a new issue comes together from a handful of people around the world, each working on their laptops from wherever they can get a Wi-Fi connection – I see no need to establish an office at any point in the near future, when such a good job can be done from wherever makes people the happiest.

Unmapped is ad-free. Clearly that’s a conscious decision. Tell me why.

Part of working in a magazine publishing house is dealing with the advertising and advertisers that make such an operation possible. The reality is that even if you start out with the best of intentions in this area, the lines eventually begin to blur between what is best for the magazine and what is best for the advertiser when it comes to editorial. Having said that, I’m not against advertising per se: in time, it may become necessary to bring advertisers on board with Unmapped in order for us to grow to the next level.

I went with a subscriber-only model with Unmapped for two reasons. The first was a pragmatic one – doing so would mean I wouldn’t have to spend any time on ad sales as the magazine was starting up, which meant I could focus more on getting the look and feel of the magazine right, and finding the best possible contributors. The second was a little more idealistic – I honestly believe that a time will come when people are so used to paying for good written content online that they won’t even question the existence of pay walls, and I believe this time is starting to approach now. Why not get in at the start and help to lead the revolution?

Incase you missed the article, here it is: http://www.unmappedmag.com/issue-15/bombay-unlimited/

Also, if you’re a little more curious about Karim, you can stalk him on twitter at: @karimmeggaro @unmappedmag

And if any of you need any free advice + occasional ridicule, here’s cyrus: @cyrusdalal7.

P.s. Cyrus is possibly the best food photographer around. He once made a vada pao look sexy. 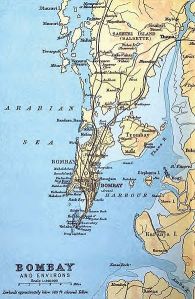